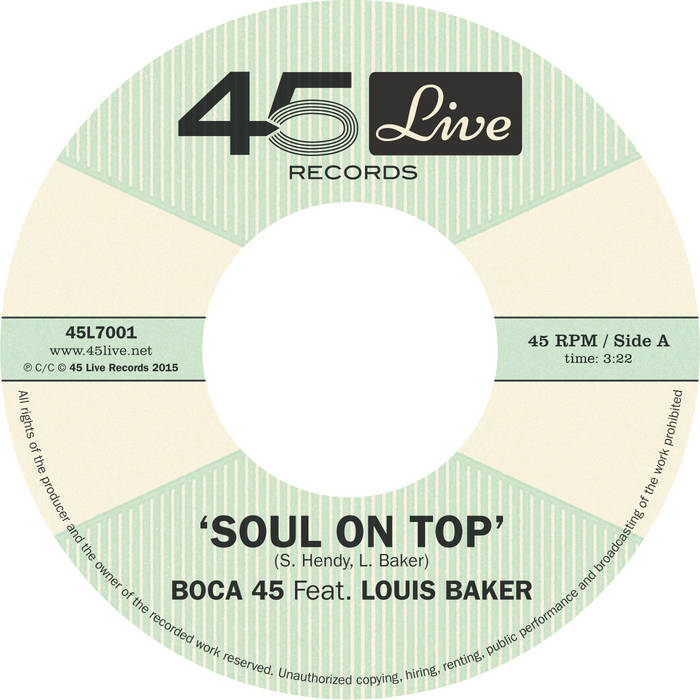 PLEASE NOTE: Boca 45 has now signed this track to Mass Appeal along with his new album, so we have removed the digital download.

The A side ‘Soul On Top’, is produced by Boca 45 and features New Zealander Louis Baker on vocals. Louis, based in Wellington, N.Z. has an emotive vocal tone that produces shades of Motown-era soul, which earned him a place at the prestigious Red Bull Music Academy in New York, when he was chosen out of 4000 applicants to take one of only 60 places. Currently gaining plaudits internationally for his sublime songwriting that has shades of J Dilla to Sly Stone, he has been touring in Europe as well as many shows and festivals down under. Boca 45 is a Bristolian legend who’s earned a mighty rep for his work with Andy Smith as Dynamo Productions, with Ben Salisbury as Dolman, with Gee Ealey as Malachai alongside his many solo records on various labels. Very much 2 talented artists that are successful in their own right who have found some common ground...

Louis was on tour in Europe in the spring of 2015 and played a show at The Sugar Factory in Amsterdam, whilst Boca was the guest DJ at the Wicked Jazz club night the same night. They end up meeting and get on brilliantly. The following day they reconvene on Red Light Radio, and having both been blown away with each others sets they decide that they must work together. A meeting of minds from different parts of the globe (UK-NZ) comes together in Amsterdam (that can't happen very often). Fast forward a couple of months and they start plotting Soul On Top - Scott makes the music / beats whilst Louis plays guitar, sings & plays bass. The result being an immediate slice of hip hop soul which will work as well on the dance floor as it will on the radio.

The B side features ‘Diegos Theme’, lifted from Boca's 2nd LP Vertigo Sounds which featured amongst other guest vocalists Kelvin Swaby from The Heavy. D.T is a sampledelic slice of b-boy heaven - Boca say's that it's inspired by his football hero Diego Maradona - ‘I wanted to make a track which would suit his personality as well as being a soundtrack to his many breathtaking goals he scored throughout his career’. A classic slice of Boca and pressed on 45 for the very first time, it’s a lot more than just a lowly B side spin!

‘Soul On Top is a great funk track put together in a hip hop/breaks style. B-side is classic Boca... great to have on 7” at last!’
DJ Format

‘A piece of stunning future soul with a retro twist. Love it!!’
Brad Baloo (The Nextmen)

‘So nice, 2 instantly playable bangers, I can see both of these fitting right into my DJ sets.’
DJ Woody (ITF DJ World Champ)

The first release on 45 Live Records, a brand new label and music project 100% focused on the mighty 45 rpm 7” single. 45 Live is a collective of DJs/Producers including DJ Food (Ninja Tune), DJ Format, Jon More (Coldcut), Ollie Teeba, Boca 45, Andy Smith (Portishead), Pete Isaac and more. With a magazine style website with features, mixes, interviews and music reviews on the 7” scene as a whole, DJ agency, 45 Live events at clubs and festivals and a twice monthly radio show out of dublab in Los Angeles, 45 Live is striving to build a global community to celebrate the beautiful 7” format.

Boca 45 has been a very busy man throughout his time as a thoroughbred DJ and Music Producer.
Touring the globe many times as a DJ taking in North America, Japan, Australia, and the vast majority of European countries as well as playing at prestigious festivals and recording for labels Grand Central, Jalapeno,Unique,Invada & Jack2Phono-
Pitch Sounds & Vertigo Sounds are his 2 full artist albums. ... more

Bandcamp Daily  your guide to the world of Bandcamp